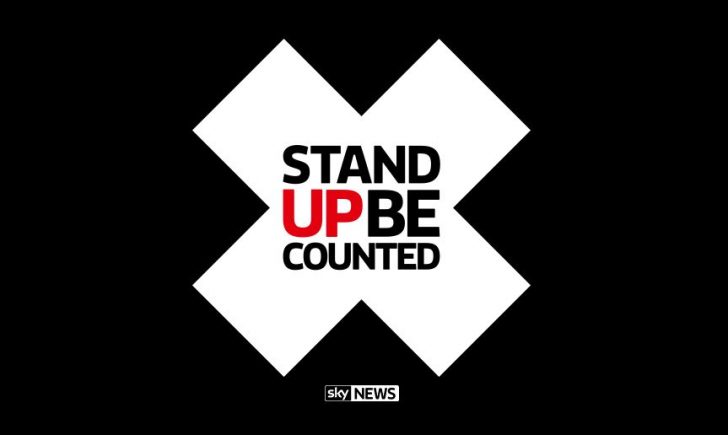 Sky News is to launch a new digital initiative that will amplify the voices of young people ahead of the General Election on May 7th next year.

On Monday 1st September Sky News will launch ‘Stand Up Be Counted’, an initiative that will see the creation of a dynamic digital platform.

The site will be a place where young people aged between 16 and 25 can post videos, articles and comments on the issues affecting them and their friends, and share them across multiple social media platforms. Their stories will become a core part of Sky News’ coverage to ensure the opinions and issues important to a younger generation are heard.

Sky News is working in partnership with the Media Trust, the UK’s lead communications charity, and other youth organisations to ensure they reach a diverse and representative number of young people across the UK.

The campaign was born out of the fact that the number of young people voting between 18 and 25 has been falling over a number of years – just 44% in the 2010 General Election. Sky News wants to encourage more of this age group to register to vote, and play an integral role in deciding the future political direction of the UK.

Young people need to register at skynews.com/StandUpBeCounted, and then there can share their views. The mobile led site is divided into four areas:

Hot Topics: An area where the latest major news item can be discussed and debated

Open Mic: Where Stand Ups can talk about any subject they like

Stand Ups: Where the profiles and content of our registered Stand Ups can be seen

Each of these areas will also allow the Stand Ups to share content via social media including Facebook, Twitter, Google+, WhatsApp and Kik. There’ll also a camera icon at the top of the page which allows users to upload videos and images in a matter of seconds, as well as a Register to Vote icon option which takes users directly through to the government’s online Individual Voter Registration site

“Our campaign is bold in scope and I hope thousands of young people across the UK will become a part of it,” said John Ryley, Head of Sky News.

“Young people have told us they don’t think politics or the media represents them or their interests. They tell us they are seen as either scapegoats or victims, and are viewed as part of the problem rather than as a solution.

“We want to give them a platform which works for them a place where they can talk about their hopes, dreams and fears about the future and share them with their contemporaries via social media platforms.

“Their voices will become an integral part of our coverage, we will highlight the issues that matter to them ensuring our content becomes more inclusive and reflective of a younger generation.’