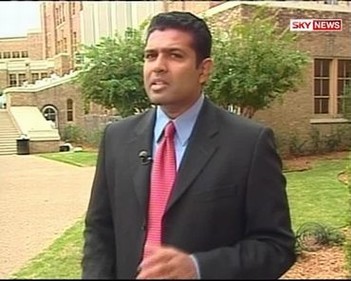 Hari Sreenivasan is a CBS News correspondent for CBS News based in Dalls.

Until February 2007, he was a New York-based ABC News correspondent. Prior to that he was a news anchor on ABC’s World News Now, serving as lead co-anchor from August 2006 to February 2007 (with Taina Hernandez).

He was born in Bombay, India, but attended high school in Seattle, Washington, where he became a radio disc jockey. During college at the University of Puget Sound, Sreenivasan interned for several TV news stations in Washington state before being hired full-time in 1995 by WNCN TV in Raleigh, North Carolina.