Where are you from?
Born in London, 8 formative years in Cyprus, Back to London for Uni.

How did you get started in broadcasting?
Got an admin job at Capital Radio, blagged a job writing the traffic bulletins for Chris Tarrant then persuaded them that they should send me out to report on football matches.

Why News broadcasting?
The buzz of tight deadlines, going live, the opportunity to make good telly and put sport on the news agenda.

Where else would have viewers seen or heard you before?
Capital Radio, IRN briefly and 5 years at Sky News before joining the BBC in 2001

What is your Best on-air moment?
Getting the first interview with Van Nistelrooy the day he signed for United, an exclusive with Dwain Chambers when he confessed how long he’d been on an illegal steroid. Also witnessed some great moments at Euro 96, various Athletics World Championships and the Sydney Olympics.

What is your Worst on-air moment?
There are 2, Some early live radio when I got very confused about a/ the score b/ who was playing. Then most recently; trying to sound enthusiastic when Arsenal won the title at my beloved White Hart Lane.

What would you like to do before your career ends?
Report on Spurs winning the league title. (career may not be long enough)

What do you like to do in your spare time?
Look after two children keep the wife happy and try and get as much sunshine as possible.

What advice would you give to anyone that would like to get into the broadcasting world?
Say yes to every opportunity, listen to everyone and don’t clock watch.

A big thanks to Olly for taking part. 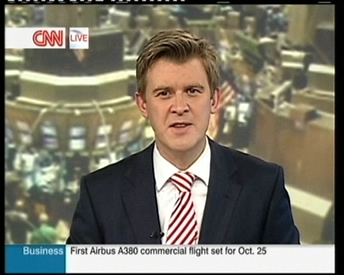 Name? OWEN THOMAS Age? 37. Where are you from? NOTTINGHAM How did you get started in broadcasting? GETTING PAID £5 / REPORT FOR RADIO NOTTINGHAM, WORKING FOR £18 / REPORT TWO MONTHS LATER AT RADIO WM WHILE OFFICIALLY BEING A…