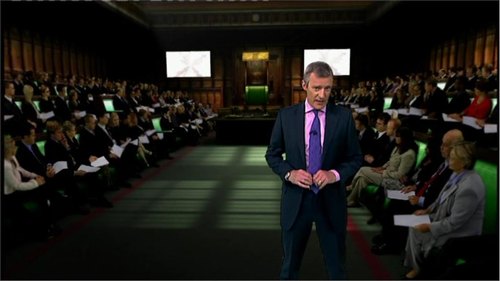 The BBC’s Jeremy Vine took part in a question and answers session on Twitter this afternoon.

Jeremy’s virtual reality graphics will be a key part of the BBC’s television coverage from the moment the polls close on 7 May and throughout 8 May.

Here’s the best of #AskBBCVine

Q: @hankandkath Do you think there will be a time when we vote digitally? Via tweet or email? How would it affect outcome?

A: Not digital-only; some people need a polling booth. Digital-only voting might increase turnout amongst young.

Q: @Welshracer What will you do if the computer breaks down? Hand back to David?

A: It doesn’t jam as often as I expect it to! But yes – pause, stare at it, click it, then call Dimbleby in for help.

Q: @achinton Please can we have less silly greenscreen tosh on election night this year?

A. Maybe one day we will move off green-screen and go back to a wooden arrow on a nail. But not yet…

Q: Stephen Dobson (via email) I know you are a huge Joy Division fan! Would you ever contemplate using ‘She’s Lost Control’?

A: When the graphics misfire – “Walk away in silence.”

Q: Tim, Fordingbridge (via email) Which constituency has been the best indicator or predictor of the national result?

A: Despite boundary changes, Dartford, Basildon & Loughborough have reflected every result since 1974

Q: Tony, Shenfield (via email) What time do we reckon the result will be known?

A: Depends how close result is. If tight (as we expect), possibly not until Friday afternoon, May 8th!

Q: @MichaelHogg77 Is there a way of showing UK map with constituencies in equal size, not geographical area or simply as a dot?

A: We do use a one-dot-per-MP map; we also have a ‘proportional map’ – showing all seats the same size, yes.

Q: @philpursglove Should voting be compulsory?

A: It’s tricky. What if someone’s personal convictions tell them they shouldn’t vote? Would they be punished?

Q: Tony, Edinburgh (via email) What is your favourite statistic from this election?

A: I was looking at the Colne Valley seat and saw the MP had been thrown out for ‘lunacy’ in 1916, he was in shellshock… But if that’s not a statistic, I would simply say: 650 MPs in the House of Commons, 326 for an overall majority.

Q: David, Glasgow (via email) Why do broadcasters turn everyone off by talking incessantly about polls which don’t mean a thing?

A: They are more accurate & detailed than they used to be; they are interesting; we have nothing else.

Q: Euan, Solihull (via email) What has been the most exciting election you’ve covered?

A: I was a political correspondent in 1997 along with @BBCJonSopel and @bbcnickrobinson and was on the Blair battlebus. Lively.

Q: @manatrue Who will win and will they have a majority?

A: I have entered the office sweepstake with a very specific prediction but @benowatt says I can’t reveal it here.

Q: @mancalledczar Do you use special lubricant for your swingometer

A: It’s bloody painful if we don’t

Q: @MatthewHillman Will Prof John Curtice be featuring? How difficult will your job be with the polls so close?

A: Yes, we love Prof John Curtice. His prediction in 2010 was correct almost to the seat. He is the boffin’s boffin.

Q: @unclegagag Do you think turnout will be higher, given how close the parties are?

Q: JamesFrost31 Which Egghead would you have next to you on the swingometer?

A: Probably @cjdemooi because if it went wrong he could be speared

Q: @GlennTodd Will more focus be on marginals and Scotland this year given their importance?

A: Yes, hugely. Watch for Midlands marginals around Brum; and the whole of Scotland may now be marginal!

Q: @Haquers How many ideas for graphics are discarded as unusable or over-complex?

A: Many! says @benowatt. (Great question). Balance is always between how powerful a graphic looks and how much it tells you.

Q: @ThisIsStanners What is your favourite ‘set’? The commons, Downing St, or just the normal one with the graphs?

A: For sheer rendering, the shot inside the lobby of the Commons (which pans up to the ornate ceiling) is amazing

A: Ben, I thought I was a bit tekkie until I met the graphics crew and I realised they DREAM of lines of code

Q: @TopTablePlanner Do you think a proportional representation system of voting would be better?

A: You would lose the clarity of ‘first past the post’, but you would lose some of the unfairness of FPTP too

Q: @AndyEdwardsR14C Any plans to visit N Ireland as these people could hold sway in the general election?

A: We refer to it a lot. The dramatic surge of the SNP is more notable at this point. But yes, I recall 1996 and Mr Major..

Q: Rupert, Speen (via email) Will you use a uniform swing to calculate seat projections again? Or how will you do it this time?

A: Uniform swing is tricky now because the UK is such a patchwork on election day. However the swingometer lives!

Q: @yrtheyalltaken Why are elections always on a Thursday? Is it so governments can start on the Monday?

A: Lots of ppl do policies – but @benowatt and I are obsessed with numbers. Seats, swings, margins. It’s what we love.

Q: @EddieInburgh Do you have specialist data journalists working on election graphics?

A: It’s @benowatt and @Edsbrown and a technical team called Elect Systems Ltd. Big diff when a graphic moves with live data.

Q: @richardoyorks Which constituency result are you most looking forward to seeing?

Q: @garry_thomas Is Peter Snow going to have a walk-on part with the swingometer?

A: He would totally upstage me! Peter is my broadcast hero so I would embarrass him I fear …

Q: @AliAlexander15 Is it a turnoff for viewers when you predict results immediately voting closes, losing element of surprise?

A: I think it’s the opposite. Everyone wants to see our exit poll proved wrong (a la 1992), so there is what they call jeopardy.

Q: @dpphinn How do you think the Fixed Term Parliaments Act has changed the campaign?

A: It has made it easier for us to prep, and definitely removed the governing party advantage of going for snap election.

Q: @andy_wright79 Can you get the #GE2015 to finish at a reasonable hour? I have to look after the kids the next day

A: I wish I had that power.

Q: @agwoolford Will you be dressing up as a cowboy again?

A: If the circumstances demand it.

Q: Mark, Stamford (via email) What are the chances the Conservatives hold their solitary seat in Scotland?

A: Chances are better than some imagine, because Dumfriesshire, Clydesdale and Tweeddale now looks like a 4-way marginal!

Q: @ml_davies If no party has overall majority, can the largest party form minority government if others could form a majority?

A: The answer is yes, but it could be very unstable. Depends if PM decides to try to carry on in those circs.

Q: @ThatTonySmith Who’s funnier, you or your brother?

A: I wish I had the guts to say me! Of course it is @RealTimVine, followed closely by sister Sonya.

BBC News presenter George Alagiah is taking time off TV for cancer treatment. In a statement on Monday, his agent said: “George Alagiah, presenter of BBC News at Six, Britain’s most watched news programme, is to take a break from… Read more