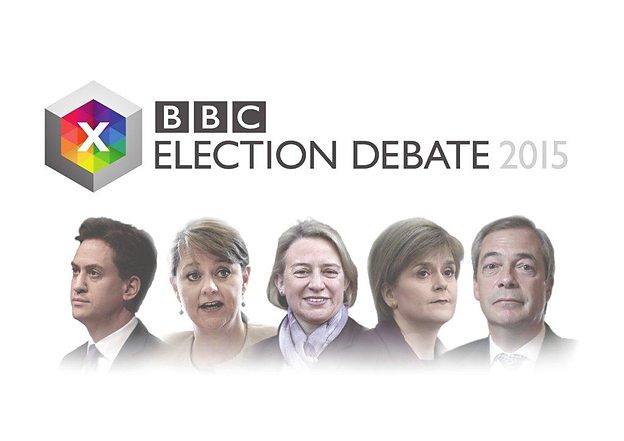 The BBC has today announced the final arrangements for the Election Debate 2015 on Thursday April 16.

The debate, to be hosted from Central Hall Westminster by David Dimbleby, features the leaders of Labour, UKIP, the SNP, Plaid Cymru and the Greens.

It will be broadcast live on BBC One, the BBC News Channel, Sky News, BBC Radio 5 live and online from 8pm until 9.30pm.

Lots were drawn among the political parties on Monday to establish the on-set positions of the leaders.

From left to right the leaders will be: Ed Miliband, Leanne Wood, Natalie Bennett, Nicola Sturgeon, and Nigel Farage.

Each will be invited to make a short opening statement before David Dimbleby introduces questions from an audience of 200 voters, selected and weighted to give a cross-section of political opinion.

The debate will feature five questions, with each leader given a minute to offer their own answer before 10 minutes of free debate. At the end of the debate the leaders will be invited to make short closing statements.

James Harding, Director of News and Current Affairs: “The BBC election debate will give a fascinating insight into the policies and priorities of five of the parties which were in Opposition during the last Parliament. The party leaders will lay out and debate their alternatives to the policies pursued by the coalition over the past five years. Afterwards, we will be able to gauge the instant reaction of other parties in an evening of viewing dedicated to helping voters understand the choices which will be before them on May 7.”

Following the debate at 9.30pm BBC One will broadcast BBC Election Debate 2015: The Reaction, a half-hour analysis programme presented by Emily Maitlis which will feature reaction to the debate from the Conservatives, the Liberal Democrats and the DUP.

David Dimbleby will leave the debating chamber to head off to host Question Time, to be broadcast on BBC One from 10.45pm. On the panel: Labour’s shadow home secretary Yvette Cooper, SNP leader at Westminster Angus Robertson, Liberal Democrat Business Minister Jo Swinson, UKIP’s Douglas Carswell, a senior Conservative and the journalist and broadcaster Piers Morgan.