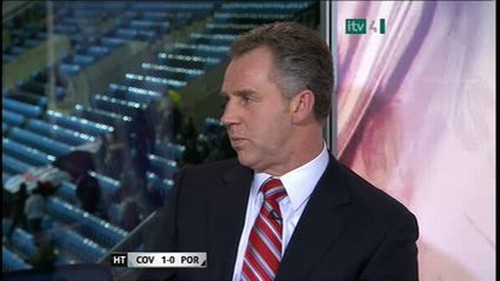 Jim Beglin played schoolboy football in his native city of Waterford in Ireland, with Bolton and Bohs, before joining Shamrock Rovers in 1980 where he went on to spend 3 years, making 4 appearances in Europe and scoring one goal.

Beglin was the last signing made by Liverpool manager Bob Paisley and moved from Shamrock Rovers for GB£20,000 in May 1983 and gradually brought into the first team over the following 18 months by Joe Fagan. He was eventually given the regular left back slot by Kenny Dalglish as a replacement for Alan Kennedy in the 1985-86 season. He made his debut in the left sided midfield position in November 1984 in the 1-1 league draw with Southampton at Anfield.

Beglin scored his first goal for the club 5 months later on 10 April 1985 in the 4-0 European Cup Semi-final 1st leg victory over Panathinaikos at Anfield and his 85th minute strike put the tie out of reach for the Greek club. Liverpool won the second leg 1-0 to set up a showdown in the final with Italian giants Juventus at the Heysel Stadium in Belgium. The night of the final was marred when a retaining wall collapsed during a riot at the Liverpool end, killing 39 Juventus supporters.

Liverpool won the League championship and FA Cup, beating Merseyside rivals Everton to both, with Beglin picking up medals for each. He also began playing for the Republic of Ireland, with the first of a total of 15 caps. But seven months after lifting the league and cup double, his leg was badly broken following a tackle from Everton’s Gary Stevens in the Merseyside derby of February 1987 It led former manager Bob Paisley to say that it was one of the worst leg breaks he had ever seen. Fellow Liverpool defender Alan Hansen stated that the tackle was “a mile high and an hour late.

Beglin recalled the injury as follows: “I knew it was bad. The play seemed to carry on for eternity for me, but it was probably just a few seconds. I looked down and I couldn’t believe where my foot was, but I knew it was where it shouldn’t be, adjacent to my shin. The pain was a nightmare.”

Recovering from the break, Beglin sustained a knee cartilage injury playing for Liverpool’s reserves in October 1988 effectively finishing his time at Anfield prematurely.

In June 1989, Jim joined Leeds United, helping the club to become Second Division champions and with periods on loan with both Plymouth Argyle and Blackburn Rovers before a recurrence of his knee injury forced him into an early retirement in 1991 at the of 27.

Jim Beglin made his debut for the Republic of Ireland on 3 June 1984 in a 1-0 win against China in Sapporo, Japan, and a mini tournament when Eoin Hand was the manager.

“Jim’s career was cut short by a dreadful injury sustained at Everton in a Derby match. He was an outstanding prospect. I remember him coming from Waterford. He was one of those players with a massive heart and massive will-to-win. He was so determined to make it in the big time. An outstanding left-back, good defensively with great positional sense and a sweet left foot.”

Beglin is currently a co-commentator on ITV.

He previously worked for RTÉ in Ireland on coverage of F.A. Premier League, UEFA Champions League matches and Republic of Ireland internationals. Beglin has also been employed by Liverpool as a voice–over artist for the club’s official DVD and video releases. He is also the co-commentator in the video game PES 2011 alongside Jon Champion. 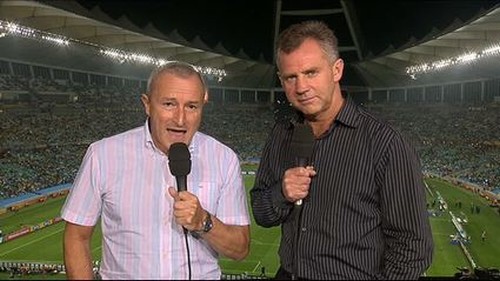