Where are you from?
Hayes, Middlesex.

How did you get started in broadcasting?
started at Wescountry television as a researcher in Weymouth after one year on Bournemouth Echo.

Why News broadcasting?
I always wanted to be a journalist – probably from around the age of 13 – I’ve always been curious about the world around me and have always been fascinated by story tellers and their skill – I suppose that’s why I’ve ended up doing what I’ve done.

Where else would have viewers seen or heard you before?
I’ve worked at ITN since 1997 first as a general reporter for ITV News, then as Moscow Correspondent (which included stints in Baghdad before, during and after 2003 war) and since 2003 as Africa Correspondent. I worked briefly as a freelance reporter at Sky News in 1996 covering UK news and enjoyed my time there. Before that I was a reporter at Westcountry Television where I learned so much and had a great laugh…

What is your Best on-air moment?
I can’t think of one – I still get apprehensive with live reports and fear I’ll forget what I’m saying or get it the wrong way round.

What is your Worst on-air moment?
When I started at Westcountry I remember getting mixed up in the middle of live report at a court case and saying that a shotgun had chased after someone.

What would you like to do before your career ends?
I’ve been very lucky at ITN to have had some wonderful opportunities working abroad and seeing so much. I’ve reported from every continent and had the pleasure of working with some fantastic and very talented people along the way. I’d like to write a book or two one day.

What do you like to do in your spare time?
I like running and have done three London marathons, listening to music and not watching the news.

What advice would you give to anyone that would like to get into the broadcasting world?
There are no shortage of people you’ll meet along the way who’ll say you’ll never make it, that can’t be done etc. They are the best motivators in the world.

A big thanks to Neil for taking part. 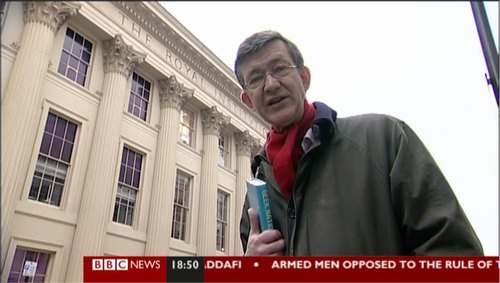 Name? Nick Higham Age? 51 (but don’t tell anyone) Where are you from? London How did you get started in broadcasting? I answered an ad for the BBC’s first dedicated media correspondent When was that? 1998 Why News broadcasting? I’d…