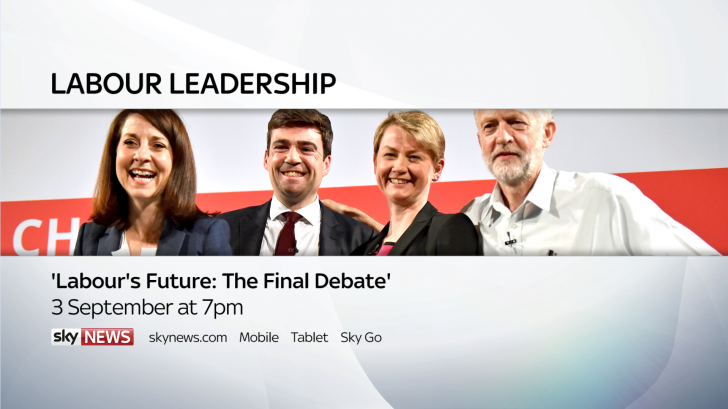 Sky News will host the final debate between the four candidates vying to lead the Labour Party.

Jeremy Corbyn, Yvette Cooper, Andy Burnham and Liz Kendall will face each other live on Sky News at 7pm on Thursday 3rd September – exactly one week before voting ends.

Labour’s Future: The Final Debate will be held at the iconic Sage in Gateshead, a traditional heartland for the party, will see candidates take questions from a representative audience of Labour voters, supporters and members. There will also be questions from social media, and Sky News viewers as well as visitors to the Sky News website.

The coverage will be fronted by Kay Burley, with Sky News Tonight presenter, Adam Boulton, hosting the debate itself.

The first half of the 90 minute debate will focus on questions from the audience in the room. The second half will see control of much of the questioning handed to the viewing audience on TV and online.

“The race for the Labour leadership is far more exciting than had been expected,” said John Ryley, Head of Sky News.

“The Sky News debate will be the backdrop to the decisive clash between the candidates, as Labour attempts to redefine itself following the defeat of the General Election.”

As well as deciding the questions, the audience will be able to vote on the candidates answers in real time. Sky News will debut an audience engagement tool developed with Microsoft – Bing Pulse. It will show real-time audience reaction to the debate and responses to specifically polled questions, which will be displayed on-screen and across Sky News’ digital platforms. The debate will also be live streamed on skynews.com in addition to a live blog with up to the minute reaction.

Following the debate, Kay will have extensive analysis and reaction of viewers using data from the Bing Pulse and from social media (#LabourDebate).