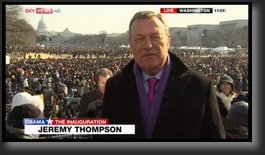 Sky News is to launch a High Definition Channel.

The HD Channel is set to launch in Spring 2010 following an upgrade to studios, production facilities and newsgathering operations in the UK and overseas.

John Ryley, Head of Sky News said: ?Sky News HD marks another landmark for a news organisation, now in its 21st year of broadcasting. It?s an investment in the future of news, for the audiences of today and tomorrow. It is a vision that clearly defines Sky’s strengths, passion and restless pursuit to be first and to be the best.

?As well as enhanced studio presentation and compelling on-air graphics, news is also about the drama of human emotion: from keynote speeches and police news conferences to picket lines and joyful crowds at ceremonial events, HD is an opportunity to bring our viewers much closer to events, building on one of Sky News? existing strengths, and we?re delighted that we can now announce we will be working towards launching this exciting new service next year.?

Jeremy Darroch, Sky?s Chief Executive, said: ?Sky News continues to break new ground in television news and it?s only natural for it to become the first UK news channel to launch in HD. It?s great news for our Sky+HD customers, giving them access to award-winning breaking news in HD for the very first time and further expanding the choice on offer.?