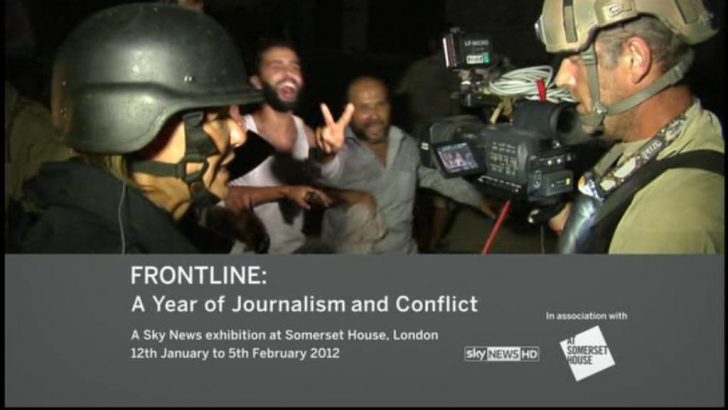 Sky News are hosting a month long exhibition in association with Somerset House from 12th January 2012 to 5th February 2012.

Frontline: A Year of Journalism & Conflict will take a look at three of the major stories of 2011; The Arab Spring with a focus on revolution in Egypt, the Libyan conflict, and the London riots.

The multimedia exhibition will offer a unique insight into the editorial, political and human aspects of some of the most extraordinary events of our time. The walls of the gallery will feature stills taken from Sky News HD footage and original video including live reports and packages that will play on screens throughout the space. Visitors will also be able to browse content on a series of iPads that will feature background interviews with the journalists, editors and producers who worked on these stories as well as timelines, maps and photo galleries.

John Ryley, Head of Sky News, said: “This year has been an exceptional one for news. The exhibition will highlight the challenges of reporting from conflict zones, both home and abroad, and how vital a reporters role is in revealing the truth.”

Gwyn Miles, Director, Somerset House Trust commented: “We aim to make the programme at Somerset House reflect what is happening in the world today. We are thrilled to be working with Sky News on this exhibition which will go behind the scenes of some of the past year’s most dramatic news stories – from how news is captured on the front line to how it is presented to the wider public.”

The exhibition will run from Thursday 12th to Sunday 5th February in Somerset House’s Embankment Galleries and is free to the public.