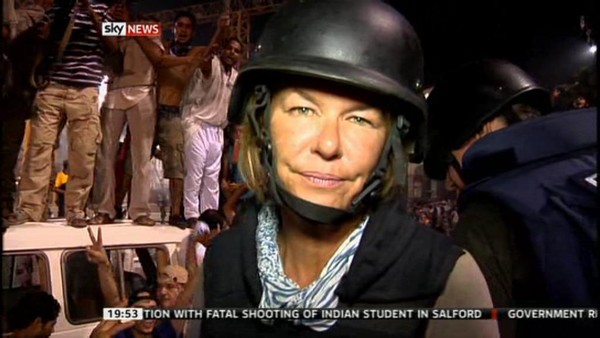 Sky won Best 24-Hour News Programme for The Fall of Tripoli, which saw Alex Crawford and team riding into Tripoli on the back of a rebel convoy truck.

Alex was the first reporter to broadcast live from Green Square as rebel forces took over the city; her reports were broadcast to the world via a manually operated satellite signal and a camera plugged into a cigarette lighter charger.

Sarah Whitehead, Head of Foreign News, said: “Alex Crawford’s exceptional live reporting from the rebel convoy as it drove into Tripoli in August was one of the most momentous pieces of news coverage of last year. I’m incredibly proud of what Alex and the team managed to achieve through their sheer determination to follow the story, and to continue to report the extraordinary and unfolding events around them.”

Stuart gained rare access to the heart of the uprising and spent four days undercover, filming life in the city of Homs. This was the first independently shot footage to be filmed in the city which verified that innocent civilians were under siege from Assad’s security forces.

Sarah added: “Covering the events in Syria is without doubt the greatest challenge for journalists around the world at the moment. Stuart Ramsay’s exceptional film, shot in Homs by Martin Smith, showed horrifying pictures of a 6 year old boy under sniper fire as he raced home with the family’s bread. This was some of the first independent evidence that ordinary Syrians were being shot at on the streets where they live. It took a huge amount of work, tenacity, bravery and determination to gather the material that went into this film – so I’m delighted that it’s received the recognition of the Monte Carlo jury.