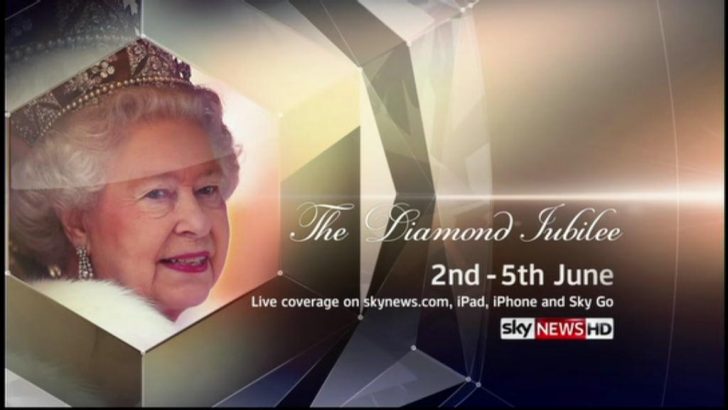 As the Commonwealth marks the 60th anniversary of the Queen’s accession to the throne, Sky News will host five days of special coverage from key locations across the country from Friday 1st June to Tuesday 5th June 2012.

Friday 1st June: Kicking off Sky News’ coverage, Jeremy Thompson will present live from Buckingham Palace in the build up to the main events. Sky News will have reporters in position as the ships amass for the flotilla around West India Dock, and as the crowds gather in Putney and along the Thames.

Saturday 2nd June: Sky News’ Royal Correspondent Paul Harrison will be at Epsom Racecourse throughout the day as the Queen attends the Derby. Sky News will continue its presentation from Buckingham Palace with Anna Botting and Colin Brazier, until it moves to Putney in the evening with Andrew Wilson. Sky News’ Royal, Religious and National Events Commentator Alastair Bruce OBE, will be on hand throughout the weekend to give expert commentary on the ceremonial and historical aspects of the celebrations.

Sunday 3rd June: As a flotilla of 1000 boats makes its way down the Thames led by the Queen in the Royal Barge, Eamonn Holmes, Sarah Hewson and Charlotte Hawkins will be presenting from the heart of the action outside City Hall. Kay Burley will be among the crowds gathering on the riverside, Andrew Wilson will be on board the specially commissioned Sky News boat, Lorna Dunkley will be in Battersea Park, Colin Brazier at Westminster Bridge and Paul Harrison will be on board Tenacious, a tall ship moored in the Avenue of Sail.

Monday 4th June: Paul Harrison will be spending the day in Buckingham Palace Gardens as the Queen hosts a garden party, and in the evening as the Diamond Jubilee Concert gets underway, Sky News’ Arts and Entertainment Correspondent Lucy Cotter will be live from The Mall. Later on in the evening a network of more than 3000 beacons will be lit throughout the UK and the Commonwealth. The Queen will light the last Beacon at Buckingham Palace at 22:30 with Kay Burley presenting live from the scene.

Tuesday 5th June: The Jubilee weekend will culminate with a day of celebrations in London. The presenting trio of Eamonn Holmes, Sarah Hewson and Charlotte Hawkins will guide us through the day’s events from the Palace, with a perfect view of the royal family balcony appearance and flypast. Kay Burley will be at St. Paul’s Cathedral for the Service of Thanksgiving, and Gillian Joseph, Adam Boulton and Dermot Murnaghan will be covering the carriage procession through the streets of London from various London landmarks.

The coverage will be available to viewers across multiple platforms, including Skynews.com, Sky Go, Sky News for iPad and Sky News TV.

During the long weekend Sky News for iPad will show all the highlights of the live events, with twitter commentary from Sky News reporters at key locations as well as interactive graphics. The app will also host a series of image galleries looking back at the 60 years of The Queen’s reign.

On skynews.com commentators including Alastair Bruce will give analysis on the significance of this royal occasion and the economic and social differences between 1952 and 2012.

Plus, with street parties being held around the UK Sky News’ regional correspondents will look at the celebrations outside the capital.