Prince Harry: Back On the Frontline – BBC News, Sky News 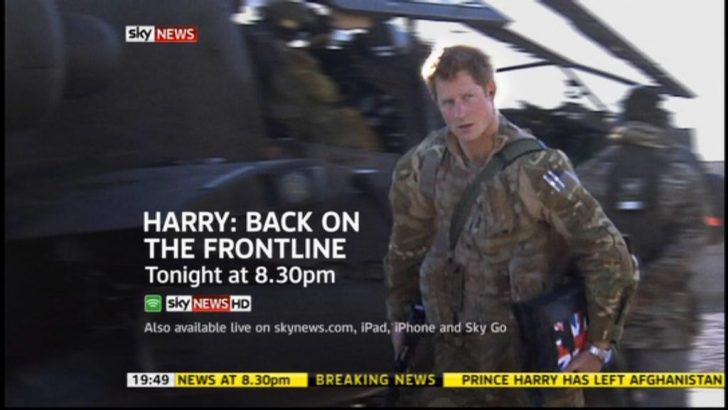 Prince Harry has left Afghanistan after serving five months on the front line.

This was the 28-year-old’s second stint in combat after serving 2 months in the country in 2007/8.

Upon leaving the war zone, Prince Harry launched a scathing attack on the media, saying he should have been entitled to privacy in Las Vegas.

In a interview conducted in Camp Bastion, Harry admits that stripping in Las Vegas was a mistake, but says the papers have made no allowances for the fact that he was heading out to war, adding: “It was probably a classic example of me being too much Army and not enough Prince.

“The way I was treated by them, I don’t think it’s acceptable.”

Sky News will broadcast a documentary on Prince Harry’s tour of duty in Afghanistan at 8.30pm and 9.30pm this evening on Sky Channel 501, Virgin Media 602, Freeview 82 and Freesat 202.

UPDATE: Sky News will rebroadcast Harry: Back On the Frontline on Tuesday evening at 9.30pm.