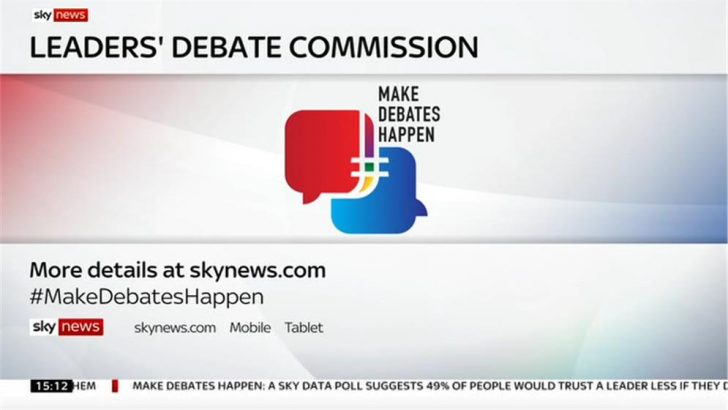 Sky News is campaigning for an independent commission to organise the running of televised general election debates between the leaders of Britain’s main parties.

John Ryley, Head of Sky News, says: “This is all about doing what‘s best for the voting public.”

The cause was brought into the public eye nine years ago when Sky News successfully lobbied for televised leadership debates ahead of the 2010 general election. Since that first debate, broadcasters and politicians have failed to agree on terms and deliver real head-to-head debates.

Sky News believes that, for the benefit of voters, there must be urgent action in taking the decision-making process out of the hands of politicians and for it to be agreed outside of any election campaign.

The Leaders’ Debate Commission (LDC) would set the format and rules of the debates, handle moderation, outline criteria for political party participation, ensure the objectivity of audiences and steer the negotiations between broadcasters and parties.

John added: “Sky News along with the other broadcasters changed the political landscape in this country by creating the first leaders’ debates eight years ago. Sadly it stands as an exception rather than the watershed it should have been.

“Political manoeuvring and failings by the broadcasters has allowed that momentum to be lost. Sky News believes an independent commission should set the terms for debates in future, to inform and engage the voting public with a head-to-head debate between the two political leaders battling it out for Number 10.”

In 2015 there was one seven-way debate with David Cameron, Labour’s Ed Miliband and the leaders of smaller parties; and last year Theresa May refused to debate with Jeremy Corbyn and her place was taken in one TV debate by then-home secretary Amber Rudd.

Sir Vince Cable, leader of the Liberal Democrat told Sky News: “It’s very much to the credit of Sky News that they’ve come up with this proposal.

“We had a very unsatisfactory position at the last election that Theresa May wouldn’t participate in leadership debates.

“On the previous occasion, in 2010 for example, there were leadership debates. And they energised the whole election campaign.

“But it’s surely right that the ground rules should be decided in a non-political independent environment of the kind [Sky] suggest.

“We should now be putting this structure in place so there isn’t argy-bargy a few weeks before the next general election.”

Sky News has written to the leaders of all the main parties.