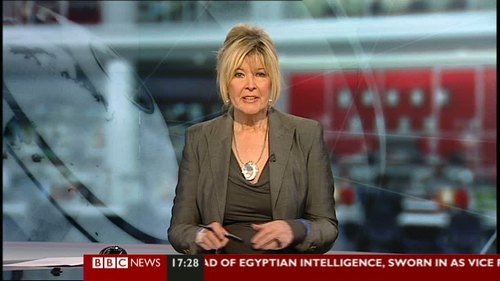 BBC News Presenter, Julia Somerville, has been awarded an OBE in the Queen’s Birthday Honours.

The former ITV News presenter, who was a regular face on news bulletins for almost three decades, was commended for her work chairing the Advisory Committee on the Government Art Collection.

In September 2003, Julia was appointed Chair of the Advisory Committee of the GAC. She steps down after serving ten years on 2 September 2013.

The Government Art Collection currently holds over 13,500 works of art, mainly by British artists ranging from the 16th century to the present day. Placed in offices and official residences, two thirds of the works are on display in British Government buildings in the United Kingdom and around the world. Dating from 1898, the Collection helps promote British art and history while contributing to cultural diplomacy.

In 2010 Somerville returned to television news as a presenter on BBC News. She occasionally presents BBC Breakfast and is a relief presenter of the BBC Weekend News on BBC One.