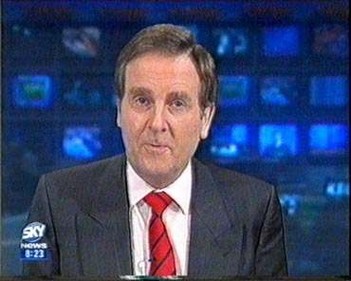 CHRISTOPHER MORRIS, one of Britain’s leading freelance journalists and broadcasters of the past six decades, is bowing out after a remarkable career reporting from more than 120 countries including 16 wars since the 1974 Turkish invasion of Cyprus where he nearly lost his life in a series of minefield explosions.

From the early days at the age of 15 as a proof reader on The Luton News, he became Fleet Street’s youngest reporter at 20 on the Daily Sketch, before setting up a freelance agency in Spain where, for 10 years, he was a foreign correspondent for most national, evening and Sunday newspapers, ITN and, finally, for BBC TV News and Radio News.

“Getting my first job in Fleet Street was bizarre compared with the challenges faced by young journalists today,” he recalled. “For my local paper I’d been made up and sent into the ring by Coco the Clown at the Bertram Mills Circus. I posted a copy of the feature to Herbert Pack, the Daily Sketch News Editor, cheekily writing : “I’m not going to clown for a job, but when can I start?”

“He replied by inviting me for an interview with the much feared Managing Editor. “Warning me not to be intimidated, the tall, imposing Cyril Morton eventually came into the room after keeping me waiting for 40 minutes. He looked at this visibly shaking, junior reporter and enquired : “Tell me young man, do you play the piano?”

“My nervous response of “No” prompted Cyril Morton to turn on his heel and leave the interview room without another word spoken. That’s it, I thought. I’ve blown it. But a minute later Bert Pack came back smiling to say “ “Well done! You’ve got the job.”

In 1966 the Spanish dictator ordered Morris to be expelled after he alerted the world to the worst disaster in US military history. A newsflash on the UPI wires revealed that a US Air Force B-52 bomber had been involved in a mid-air collision with a refuelling aircraft.

He called the Daily Mail foreign desk where the duty editor dismissed suggestions the Strategic Air Command plane on a Cold War global patrol might have been carrying H-bombs : “Keep the story down to a paragraph, old boy!” he said, an instruction that would change dramatically within 24 hours.

For Morris then drove from Madrid to the crash site around the Mediterranean village of Palomares in southern Spain and was the first journalist to expose the shocking aftermath of the disaster. The B-52 had jettisoned four H-bombs as it crashed bringing terror, radioactivity and later deadly sickness to Palomares when two of the nuclear devices cracked open on impact spilling lethal plutonium over a vast area,

At first the US government and military tried to cover up what had happened. And when Morris broke the story worldwide, Franco ordered his expulsion fearing damage to Spain’s fledgling tourist industry. Only hours later when the Pentagon finally had to admit widespread radioactivity and nuclear contamination was the expulsion order rescinded.

After a decade in Spain reporting the political twilight years of the Franco regime, the surge in Basque terrorism and the boom in tourism, he returned to London and the BBC – only to be sent back almost immediately to report on first, the Basque terrorist group ETA’s assassination of the dictator’s chosen successor, deputy Prime Minister, Admiral Luis Carrero Blanco, and, soon after, Franco’s own death and funeral.

The early seventies signalled the height of The Troubles in Northern Ireland where he reported extensively for the BBC, including Operation Motorman in Londonderry when he exclusively accompanied British troops when they raided IRA strongholds in the Creggan and Bogside.

His first war assignment in Cyprus was to end in disaster when a Press convoy strayed into a minefield. The PA newsflash on the morning of August 8, 1974, caused chaos and confusion in the BBC Newsroom.
It read : “BBC newsman Paul Morris has been killed in a minefield explosion in Cyprus.”

“Everyone thought I’d been fatally wounded,” explained Morris. “The BBC even sent an executive to my home in St Albans to wait and be with my wife once they’d confirmed I was dead. They also alerted all newspaper and broadcast media not to name me until there was confirmation who’d been killed.”

Seven journalists were, in fact, injured and BBC sound recordist Ted Stoddard died when five anti-personnel mines exploded. Morris came close to death after shrapnel hit him in the chest, collapsing a lung, shattering ribs and paralysing his left arm.

Although seriously wounded, in hospital for months, and with his arm permanently disabled, he returned to work a year later – and more war assignments. More than 50 particles of shrapnel remain embedded in his chest and after 3 years of intensive physiotherapy use of his arm was partially restored when injured nerves regenerated from shoulder to fingertips at the rate of one millimetre-a-day.

By chance in February, 1981, he was back in Madrid, the only journalist inside the Cortes, the Spanish parliament, when rebel civil guards burst in during an attempted coup to oust King Juan Carlos. Along with more than 300 Spanish MPs, Morris and his BBC TV crew were held hostage at gunpoint for several hours before being released. His eyewitness account and film of the shoot-out has become an historic record of the day democracy defeated dictatorship in Spain.

During the Falklands conflict he was one of only a handful of British journalists ever allowed to report from the enemy side during a war infuriating Prime Minister Margaret Thatcher because the daily satellite feeds from Buenos Aires did not encounter the same communication difficulties faced by BBC reporter Brian Hanrahan with the naval task force.

“In the phoney propaganda war and after the Argentines ludicrously claimed to have sunk the aircraft carriers Hermes and Invincible half-a-dozen times, I was being dubbed “The BBC reporter the sailors wives love to hate!” said Morris, “even though I poured scorn on the Argentine claims. Equally I was under censorship and under attack in Argentina when the warship Belgrano was sunk with 363 crewmen lost. The junta produced the Belgrano’s captain at a hostile Press conference in the capital, and the six British journalists attending suddenly became Irish for obvious reasons, while later 3,000 protestors laid siege to our hotel as armed security men stopped them coming in to lynch us.”

After 3 months in Argentina he was immediately assigned to Israel to cover the invasion of southern Lebanon before the BBC decided to switch him to the opposite side. For several weeks he was trapped inside West Beirut with Yasser Arafat’s PLO guerrillas and under daily shellfire from the Israeli Defence Forces he’d previously he’d been accredited with. His cameraman, Don Leggett, was wounded in the leg in a shell explosion and smuggled out to Tel Aviv where, ironically, he was operated on by an Argentinian surgeon.

Morris took another BBC crew into two Palestinian refugee camps – Sabra and Shatila – where they uncovered the infamous massacre of 3,500 civilians by Lebanese Phalangist militias. Israeli soldiers spotted the BBC team but they managed to escape and he smuggled out the damning videotape evidence that almost led to the downfall of the Israeli government. Defence Minister Ariel Sharon, later to become Prime Minister, was forced to resign over Israeli complicity in the massacre.

During the Iran-Iraq war, after being the first journalist to report the fall of the key oilport of Khorramshahr, Iran’s so-called “hanging judge”, Ayatollah Khalkhali, broadcast on Iranian TV putting a price on his head describing Morris as “a serpent of Western imperialism” though he managed to evade capture by Republican Guards searching for him. At the frontline with Saddam Hussein’s forces he witnessed their use of chemical and biological weapons when they first invaded Iran.

In the 1991 Gulf War with Sky News he was the first British television journalist to reach Kuwait City on the day of liberation ahead of Sandy Gall’s ITN team who were delayed when their armoured vehicle’s tyres were shredded by shrapnel on the motorway. He reported on the massacre at the Mutla Pass when coalition forces intercepted the retreating Iraqi army. Hundreds died and the slaughter was a key reason why President George Bush Senior then halted plans to march on to Baghdad.

He also reported from the various frontlines during the civil war in Bosnia and was trapped in Sarajevo for several weeks when it was under siege by Serb forces. After a hazardous journey with his Sky camera team through blizzards, across mountains and dodging fierce fighting and “ethnic cleansing” he managed to reach Srebrenica where 7,000 Muslims had been rounded up and shot by the advancing Serbs.

He was the only TV journalist to accompany Bob Geldof on all his visits to the famine-stricken countries of Africa after Band Aid and Live Aid when his reports for BBC TV News helped to raise £70 million in aid.

Among other major foreign assignments Morris covered for the BBC and Sky was the first interview with master spy Anthony Blunt, the1989 San Francisco earthquake, the fall of the Berlin wall, the attempted coups in Russia against presidents Mikhail Gorbachev and Boris Yeltsin, the release and first interview with Nelson Mandela and his inauguration as Africa’s first black president, the assassinations of India’s prime ministers Indira and Rajiv Gandhi, the election of Bill Clinton for his first term as US President, the 9-month trial of O.J. Simpson in Los Angeles, and the handover of Hong Kong to China.

He has also reported on several Royal tours with the Queen and Duke of Edinburgh in Canada and Australia, with Prince Charles and Prince Harry in Africa, the royal wedding and honeymoon of Prince Charles and Princess Diana, and on their first-ever royal tour together in Australia and New Zealand. He was Sky’s commentator at RAF Northolt for the return of the Princess after she was killed in Paris, and later for her funeral at Althorp.

While at the BBC, Morris was the newsreader on the day Lord Mountbatten was murdered by the IRA. The audience that night of 26 million is still the record for a British TV news bulletin as ITN was on strike. It’s a record unlikely ever to be surpassed with the proliferation today of so many digital satellite television channels.

For almost two years in 1988 he returned to freelancing abroad, this time as Australia correspondent for the BBC setting up the Corporation’s first TV news studio in Sydney, as he had done previously 21 years before in Madrid. He was also “The Times” correspondent for Australasia.

In 2000 after leaving Sky News, where for 11 years he was both senior foreign correspondent and one of the main news anchors presenting over 10,000 live bulletins, he launched OmniVision, an independent TV production company based at Pinewood Studios in Buckinghamshire.

As a producer and director successful commissions include a television series “Only Food and Forces” filmed in Afghanistan, Oman, Norway, the Falkland Islands and the UK. Also, documentaries on one of Britain’s most famous actors, Sir John Mills, in his last interview just before he died, and another “Kate Winslet: Starmaker to Superstar” about her career from a Reading theatre group to Hollywood stardom.

He has won several awards for his reporting during a distinguished career including the Golden Nymph at the Monte Carlo International Television Festival. He’s also the author of a worldwide best-selling book, “The Day They Lost The H-Bomb”, about the 1966 disaster in Spain.

“After covering so many major stories for newspapers, radio and television during the last 60 years maybe it’s time I should take a rest?”, observed Morris, anticipating retirement at 75. 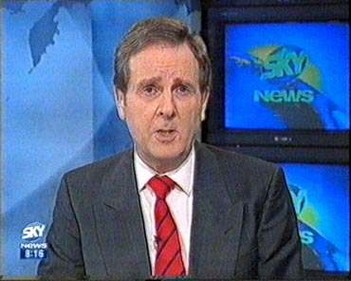 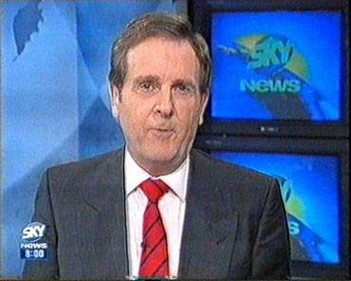 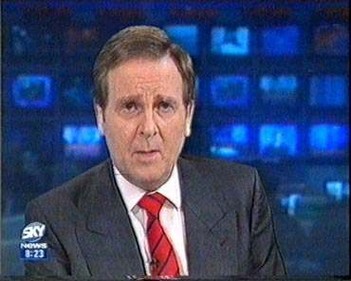 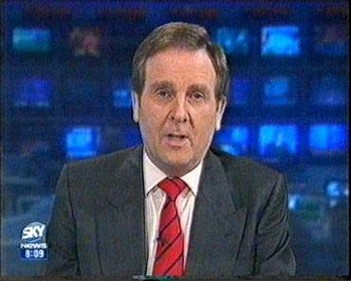 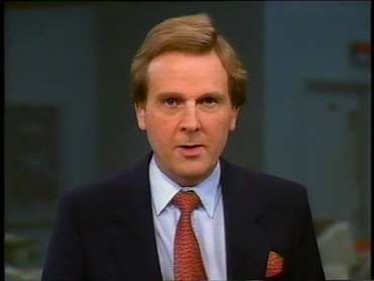 Tom Macleod is a former presenter on Sky News. He has previously worked for Sky Sports and was the writer and presenter of the Sky documentary ‘Concussion: The Impact on Sport’. Tom has worked for the BBC and on commercial… Read more