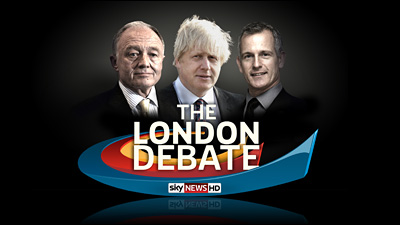 Sky News are to host a live London Mayoral debate in the heart of the City ahead of the election on 3rd May.

The one hour debate will broadcast live at 8pm from Heron Tower in the City and will have a town hall style set up, with opening and closing comments from each of the candidates.

The trio will also take questions from an audience of 250 Londoners and from viewers watching at home.

This will be an exciting debate where the audience will have the chance to ask the candidates about the issues affecting them personally as London residents, said Chris Birkett, Executive Editor of Sky News.

It will be a high profile opportunity for the candidates to convince the public why they should occupy City Hall for the next four years. As we know, live debates can often see the strongest of performers falter, meaning this debate will play a major part in their campaigns.

After the debate there will be an hour-long programme that will review and analyse the performance of each of the participants. Guests will include other mayoral candidates, eminent Londoners and high profile journalists.

Viewers can submit questions to the candidates via the Sky News Facebook page and on Twitter by using the #skylondondebate hashtag.