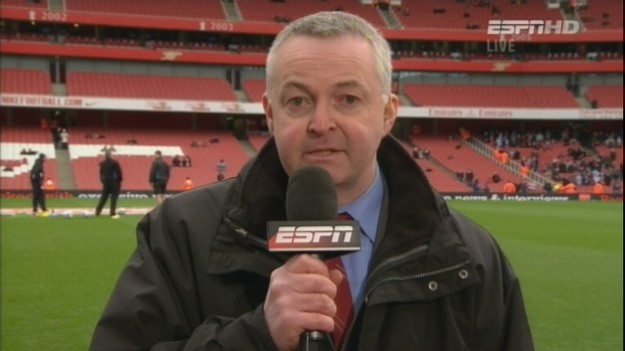 BT Sport’s commentator Derek Rae has announced he is to leave the broadcaster at the end of the season and return to the United States.

“Usually prefer tweeting about football but have some personal news to pass on,” he said on Twitter.

“After much deliberation, I have decided that this will be my final season based in the U.K. with BT Sport. As of this summer, we will be returning to our home in Massachusetts.

“We left a big part of our lives in the USA when the opportunity to work on live Scottish & European football arose here with ESPN UK.

“For family reasons, it’s the right time to move back after eight wonderful years broadcasting on TV across the U.K. and Ireland. As a commentator, I still have many goals & will be striving to achieve them in a US market I know well from 2 decades working in it.

“It has been an immense privilege to be a member of such a talented, dedicated BT Sport/Sunset & Vine production team in Scotland. BT Sport arrived as the new kid on the block, promising to innovate with its coverage. I hope you agree it has been an enrichment.

“Wherever I’ve worked, in the U.K., the USA or Germany, my commitment has always been to broadcasting excellence. It has been a professional delight to commentate for BT Sport from its very first day on the air in 2013.

“I’m grateful to everyone at BT for their unwavering confidence in me as a broadcaster and will miss all my colleagues. It has been a thoroughly enjoyable period and I have no doubt BT Sport will go from strength to strength in the years ahead.

“I’m not gone yet and look forward to seeing out this season with hopefully plenty of exciting May matches to commentate on. Thanks for watching, listening and reading this. I hope you’ll still follow me here on Twitter.”

Rae’s career started In 1986, when BBC Radio Scotland announcer David Francey suffered a knee injury and Rae, a 19-year-old student at the University of Aberdeen who had sent the BBC a copy of his radio work, substituted for him on the call of a Scottish Premier Division game between Kilmarnock F.C. and Dumbarton F.C.

The network was impressed and hired Rae to call the Rous Cup match between rivals England and Scotland the following week. The BBC then hired him as its Scotland football correspondent, a job he held for five years.

Rae moved to the United States in anticipation of the 1994 FIFA World Cup. FIFA hired him as a press officer and he oversaw the World Cup games that were held at Foxboro Stadium.

Rae met his wife Beth Powers while working on World Cup preparations and the two would later settle in Beverly, Massachusetts.

He would then go onto joined ESPN International, and in August 2009 became the lead commentator for Scottish Premier League matches on the UK version of ESPN.

In July 2013, Rae was confirmed as one of the lead voices on the new BT Sport channels. He commentates every week on the SPFL as well as the Europa League, Bundesliga and Ligue 1.