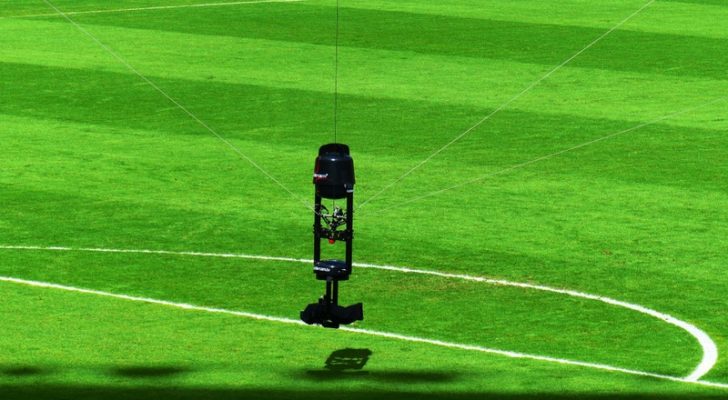 Sky Sports will use ‘Spidercam’ during their coverage of Liverpool’s visit to Manchester United this Sunday.

Spidercam is a system which enables a television camera to move both vertically and horizontally over a predetermined area, typically the playing field of a sporting event such as a cricket pitch, football field or a tennis court.

The cam operates with four motorized winches positioned at each corner at the base of the stadium, each of which controls a Kevlar cable connected to a gyro-stabilized camera-carrier, or dolly. By controlling the winding and unwinding of the cables, the system allows the dolly to reach any position in the three-dimensional space.

The two most successful sides in English football – Liverpool and Manchester United – meet on a massive day in the north west that also sees Everton host Man City in the earlier match. In total, the four teams on show have been crowned champions of England 51 times.

“It is an unmissable Super Sunday and Sky Sports will pull out all the stops to create the best possible experience for our viewers,” said Gary Hughes, head of Sky Sports Football.

“Spidercam for the first time, all our biggest names giving their views on a massive afternoon, it will be what everyone will be talking about on Monday – including Thierry and Jamie on an MNF special.”

Coverage of Manchester United v Liverpool starts at 3.30pm on Sky Sports 1, while the build up to Everton v Manchester City starts at 12.30pm