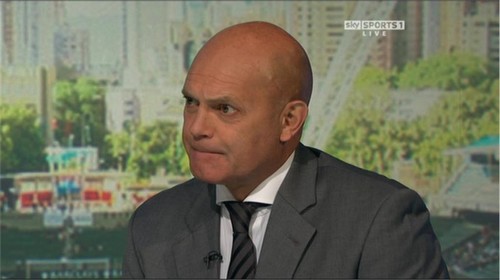 The Daily Mirror is reporting that former England international Ray Wilkins is seriously ill in hospital after suffering a cardiac arrest.

Wilkins, who works as a pundit for Sky Sports News and talkSPORT, is understood to have fallen and hit his head after his heart stopped.

He was taken to St George’s Hospital in Tooting, London, where he has been put in an induced coma.

“I hope everyone can respect the family’s wishes over privacy at this very difficult time for us,” said Ray’s son Ross Wilkins.

“It’s touch and go whether my father will get through this.”

Ray’s professional career started in 1973 where he played for Chelsea for six years before joining Manchester United, Milan, PSG among many other teams.

Since his playing career ended he has worked as a football coach and manager with Queens Park Rangers, Fulham, Chelsea and Jordan. He was most recently the assistant manager of Aston Villa.

His wife Jackie told the Daily Mirror: “He’s in hospital, he’s had a cardiac arrest and is in intensive care. He is not in a good state at all, I’m afraid. He’s critically ill.

“The cardiac arrest led to a fall which has meant he’s had to be put in an induced coma. It’s very, very bad. It’s a very difficult time for the family. He’s going to have a further scan on Tuesday.

“We hope to have an update then. It’s been a very difficult time for us.”