Sky Sports to launch every Premier League club On Demand 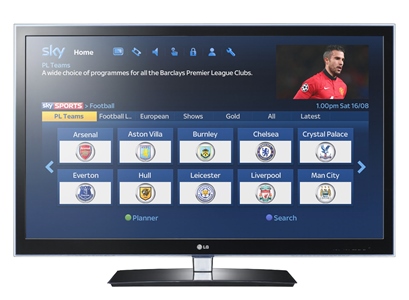 Sky Sports On Demand will launch a section dedicated to every Barclays Premier League club, allowing fans to catch up on programming and features on their club at any time.

For the first time, viewers will be able to choose from 20 different club sections in the on demand section on the Sky+HD box.

The service will be introduced for the new football season and is part of Sky’s biggest ever season, including more of the games that matter from the Barclays Premier League and the launch of Sky Sports 5, the new home of European football.

The new club sections offer fans an easy way to find and watch the latest content on their favourite team. The sections will offer an ever increasing library from a range of content including:

“For the first time, Sky Sports viewers can download and enjoy some of the best content dedicated to their team, whenever they want,” said Gary Hughes, Sky Sports Head of Football.

“With massive growth in on demand TV viewing, we’re delighted to introduce this brand new service for Barclays Premier League fans. Fans of all 20 clubs will soon be able to watch the latest news and views on their club at any time, thanks to Sky Sports.”