Phil Neville to leave Everton at end of season, but is he bound for BT Sports? 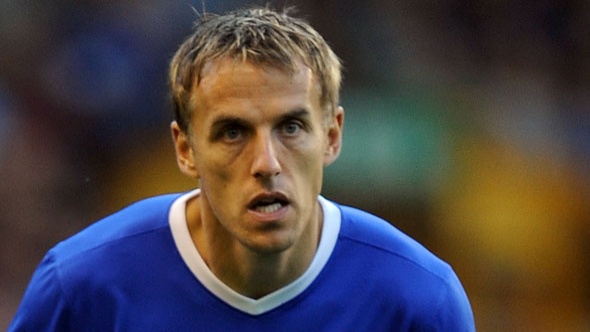 Everton footballer Phil Neville has today confirmed that he will be leaving the club at the end of the current season.

Neville, who joined Everton from Manchester United in the summer of 2005, will take some time to weigh up his options before deciding on his next career move.

Neville said, “It’s been an honour to play for and captain Everton Football Club. I’ve thoroughly enjoyed my time on Merseyside and will leave with immense pride.”

Why are we mentioning this story on a TV based website? Well, because it adds fuel to the rumours that Phil is to follow in his brother’s footsteps and take up TV punditry.

Gary Neville left Manchester United at the end of the 2010/2011 season to pursue a career at Sky Sports, where he serves as a co-commentator and pundit for the network’s football coverage.

If Phil is to join the world of sports broadcasting, one would imagine it would be for the newly created BT Sports, which launches this summer.

The telecom giant won the rights to show 38 live games a season from the Barclays Premier League, including 18 of the top clashes, for three years from August 2013.

So far, only Jake Humphrey, Former BBC Formula One presenter, has been confirmed for the network’s football coverage..