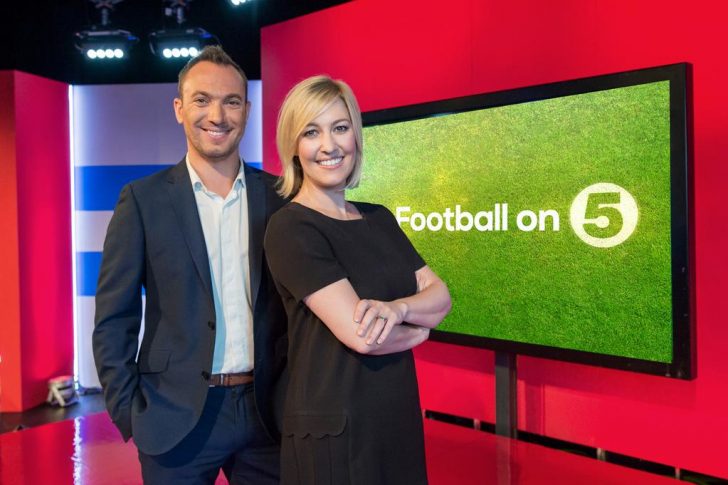 ‘Football League Tonight’ which launches on Saturday 8th August at 9pm will feature every goal from all three divisions of the Sky Bet Football League.

Kelly Cates was part of the Sky Sports News launch team, went on to report on the 2010 FIFA World Cup for ITV, the London 2012 Paralympics for Channel 4 and now presents 606 on Radio 5 Live with pundit Ian Wright. She brings a wealth of knowledge and passion for the game to Channel 5’s new Football League highlights show.

“I’ve always been drawn to the passion and unpredictability of The Football League,” said Kelly.

“I can’t wait to be involved in the show and look forward to welcoming viewers to the new home of the highlights show on Channel 5.”

From trialling Olympic Games bids to World Championship Snooker, refereeing for the FA for a day to Rugby League, George Riley has earned his stripes at the coal face of sports broadcasting. A regular on BBC Breakfast, the BBC sports news team and Radio 5 Live George has passion for the local face of British sports and getting down to the details the fans need to know.

George Riley added: “It’s exciting to be a new face on a new Football League highlights show which has a new home on Channel 5! With plenty of opportunities for viewers to get involved I’m looking forward to interacting with the fans and getting to the heart of the game.”

Each show will feature extended coverage of that weekend’s best matches and will include every single goal from all three divisions. Players, managers and fans will also be encouraged to join us in the studio each week, or take part in the conversation via Skype and Facetime.

With Kelly’s 50,000 Twitter followers and George’s 30,000 the presenters will be able to engage with viewers direct and join the weekly debates from the studio. Viewers can also use the handles @footballon5, #footballon5 and also catch up on Demand 5 on multiple platforms.

Channel 5 also confirmed that Football League Tonight will continue in weeks where there is no Sky Bet Championship programme and will provide a special focus on the very best games in Sky Bet League 1 and Sky Bet League 2.

“Kelly and George make an exciting new combination. They are strong editorially, really know their football and aren’t afraid to add humour to the mix,” added Mark Sharman, Executive Producer for Channel 5.

“We think the Football League is a great product and we intend to capture the passion, devotion and sometimes the disappointment that comes with following a League team. In Sunset and Vine, we have the production company to achieve that.”