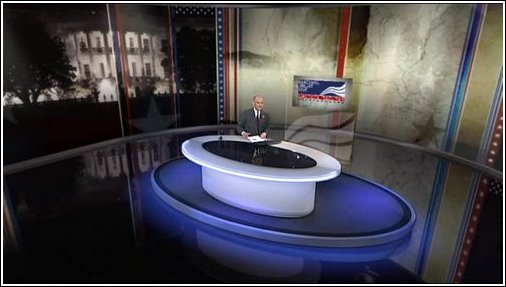 Alastair Stewart gave us a gimps into the ITV Election Studio on the late news tonight. ITV’s coverage starts at 11:45pm on Tuesday and will run till 6am.

BBC – The BBC is to simulcast its results programme on BBC1, BBC News channel, BBC America, and BBC World.

David Dimbleby will join Matt Frei in Washington for the programme, which starts at 11.15pm UK time.

Katty Kay, Philippa Thomas, Laura Kuenssberg, John Simpson and Justin Webb are a few of the correspondents that’ll be on hand this Tuesday night.

Andrew Neil will be in New York and Washington for BBC2’s Daily Politics show on November 5 and 6.

The Daily Mail reported last week that BBC would send 125 staff to the US, as well as the 50 already there. ITV News will have between 15 and 20 while Sky News will send 40.

Jeremy Thompson will present Live at Five from Texas as of Monday. The fight for the Democrat nomination continues with Clinton and Obama fighting in Four more primaries. Rhode Island, Vermont, Texas and Ohio. These Primaries are must win for…