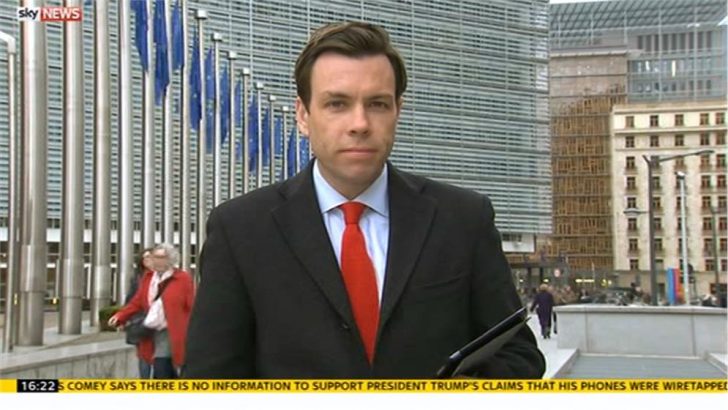 Adam Parsons, who is currently a business correspondent at Sky, will replace Mark as Europe Correspondent.

“So, after 4 extraordinary & fascinating years covering Europe, it’s time to move on. I’ll soon be moving patches to the Middle East,” said Mark on Twitter.

“An interesting time to be there but I’ll miss Brussels hugely. The wonderful @adamparsons is taking over in België with his Europe adventure ahead!”

Mark has been a News Reporter at Sky News since 2007. He joined the news broadcaster as a producer in 2005 and has covered a huge variety of stories with Sky ranging from the conflicts in Afghanistan, Iraq and Libya to the abduction of Madeline McCann and the Jersey child abuse scandal.

Adam Tweeted: “In August, I’ll be taking over as Europe Correspondent for @SkyNews, based in Brussels but covering the whole continent.

“An exciting, fascinating challenge, reporting on a time of change across Europe. And yes – Brexit too.

“I’m following on from @Stone_SkyNews and I get to work with a superb @SkyNews team in Brussels, including @skynewsmichelle.”

Adam joined Sky News in 2017 from the BBC where he had been presenting Radio 5 Live’s ‘Wake up to Money’.

Before joining the BBC, Adam was a newspaper journalist, starting on the Watford Observer, then moving to The Sunday Times, ending up as the Sports Editor of Sunday Business.

He moved to the BBC in 2001 as a Sports Correspondent and covered Olympic Games, World Cups, FIFA scandals and England winning the World Cup..