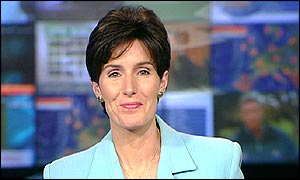 Her parents and husband Jim were with the 40-year-old at her home in London.

She had been receiving treatment for the disease for more than a year.

Nick Pollard, head of Sky News, said: “This is a great tragedy for Fiona’s family.

“Fiona was a lovely woman who was very highly thought of professionally and was regarded with great affection by friends and colleagues throughout the industry.

“She will be sadly missed here. Our sympathies go to Fiona’s husband, parents and the rest of her family.”

Fiona had worked at Sky News for more than five years.

After graduating from Oxford University, she started her career in the West Country at GWR radio as a reporter.

She then moved to London to work at TVam as a producer and reporter during which time she produced a highly acclaimed series on Romanian orphans and Aids.

She became health correspondent at GMTV, then in 1994 took a job as main news anchor for Channel One television.

Three years later she moved to Sky News as a presenter.

Former ITV News presenter Salma Siraj has died. Salma was diagnosed with Colorectal cancer in early 2021. Her husband said: “Treatment had appeared to go well and although there had been a few complications there was nothing to suggest the…