Sky News has today announced its coverage details for the up and coming U.S. elections.

U.S. Correspondents, Michelle Clifford and Robert Nisbet will follow the two Candidates on their campaigns. Michelle will broadcast on election night from Barack Obama’s state of Illinois and Robert from John McCains state of Arizona.

Dermot Murnaghan well spend time in Indiana – a new key swing state – before moving on for Chicago. Anna Botting will be positioned on the west coast in San Francisco.

Adam and Jeff will also present from Stateside. Adam Boulton will present Sunday Live (2nd Nov.) from Miami Florida. Jeff Randall will be discussing big business issues on the eve of the election.

Sky News Unplugged will come live every weeknight from 27th October from the Miami.

John Ryley, Head of Sky News, said: “This is one of the biggest overseas operations Sky News has ever put on and we will be bringing viewers election coverage and analysis from exciting backdrops and interesting locations, outside of the beltway and offering a view from the real America, outside of Washington. The White House in Miami will provide us with a unique location to bring coverage and insight from the heart of a crucial swing state. 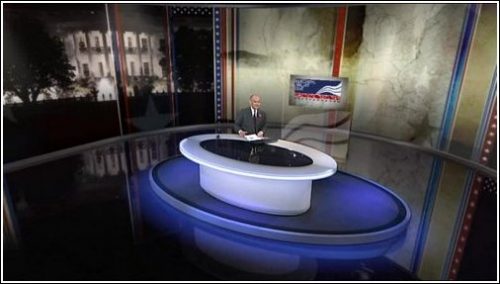 Alastair Stewart gave us a gimps into the ITV Election Studio on the late news tonight. ITV’s coverage starts at 11:45pm on Tuesday and will run till 6am. Alastair, Trevor McDonald, Mark Austin, James Mates, John Irvine and Bill Neeley…

Jeremy Thompson will present Live at Five from Texas as of Monday. The fight for the Democrat nomination continues with Clinton and Obama fighting in Four more primaries. Rhode Island, Vermont, Texas and Ohio. These Primaries are must win for…