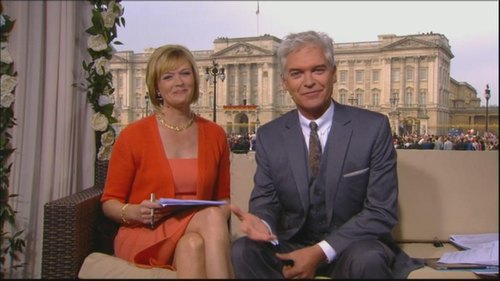 Julie Etchingham and Phillip Schofield will present ITV’s live coverage of the Royal Wedding of Prince Harry and Meghan Markle on Saturday 19th May.

The pair – who also fronted the Royal wedding of William and Kate – will broadcast from a specially constructed studio on The Long Walk in Windsor.

Harry and Meghan – The Royal Wedding will be on air from 9.25am until 3pm, with Julie and Phillip joined by a range of guests including those who know Prince Harry and Meghan, as well as friends of the Royal family.

“I’m delighted to be working on the Royal Wedding – and teaming up again with Philip, just as we did in 2011 and for the Diamond Jubilee,” said Julie.

“It’ll be a day of big celebrations not only in Windsor but around the country – and it’ll be huge fun capturing the spirit of a great British occasion.”

Mary Nightingale will be positioned at Windsor Castle spotting and interviewing guests as they arrive, accompanied by a line-up of fashion experts and Royal commentators.

Rageh Omaar will exclusively join Sentebale, the charity co-founded by Prince Harry, for traditional wedding day celebrations in Lesotho. Rageh will be live from the ‘Mamohato Children’s Centre where he will be joined by beneficiaries and staff many of whom have met and been supported by Prince Harry during his numerous visits to the country.

James Mates will lead live commentary of the service from inside St George’s Chapel.

ITV News’s Royal Editor Chris Ship will provide his expertise throughout the day, while Nina Hossain, Charlotte Hawkins and Charlene White will be based at key positions in Windsor and with crowds celebrating along the procession route.

Phillip said: “So happy to be back with Julie, my Royal Wedding partner (we don’t get to work together very often!) and the brilliant team at ITV News. Put your hat on, we’re going to have a party!”

ITV3 will broadcast a one hour special highlights programme at 8pm on May 19th, which will pick out key moments from the service and the celebrations.

ITV will also broadcast a string of documentaries in the lead up to the wedding, including: Invitation to a Royal Wedding (29th April at 9pm), Royal Wives of Windsor (April 30th and 1st May at 9pm), and Prince Harry’s Story: Four Royal Weddings…(May 3rd at 9pm).

Royal Wives of Windsor is a documentary series exploring how some of the women who wed into the house of Windsor over the last century have transformed the most famous dynasty in the world. Elizabeth Bowes-Lyon (The Queen Mother), Wallis Simpson, Lady Diana Spencer, Sarah Ferguson, Camilla Parker-Bowles, Sophie Rhys Jones and Catherine Middleton have all faced judgement by the British public. Their weddings, scandals, sense of duty and tragedy have helped shape the nation’s history. The Windsor’s latest bride, Meghan Markle, is already proving transformational. In this blue-chip series, historians David Starkey, Kate Williams and Piers Brendon, writers and broadcasters Jeremy Paxman and Afua Hirsch, biographer Andrew Morton alongside royal insiders provide a definitive review of British social history as reflected through the lives of the royal wives of Windsor.

Prince Harry’s Story: Four Royal Weddings charts Harry’s journey from a childhood touched by grief, through active service as a soldier in Afghanistan and his later international charity work, to his upcoming wedding to the girl of his dreams, through the prism of the most important turning points in his life – four Royal Weddings and the tragic death and funeral of his mother. This is Harry’s story told in a new and unique way, featuring stunning royal footage, dramatic newsreel and insightful and entertaining commentary from royal sources, historians, journalists and figures from throughout his life and career.