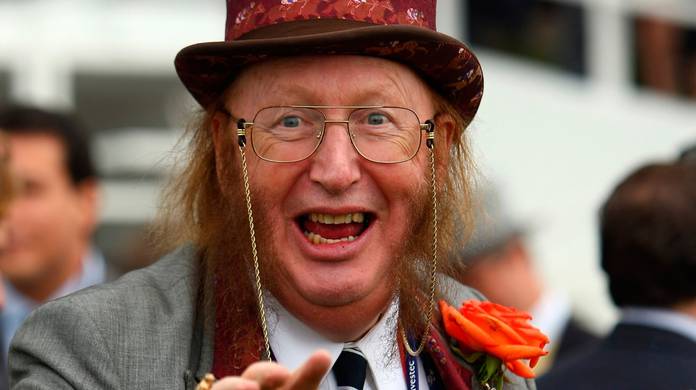 John McCririck has died at the aged of 79.

For more than three decades McCririck was an integral part of racing coverage on British television in his role as betting guru for ITV and then Channel 4 Racing.

He also appeared on other TV shows, including: You Bet!, Bullseye, and starred in the third series of Celebrity Big Brother.

After failing to get into the diplomatic service, he was briefly a waiter at the Dorchester hotel. During the era when off-course betting was illegal in the UK, he worked for an illegal bookmaker, before becoming a bookmaker himself, which he admits that he failed at. He then became a tic-tac man.

He began his career in journalism at The Sporting Life, where he twice won at the British Press Awards for his campaigning journalism. He joined the Daily Star in 1988.

Having previously become a results sub-editor on the BBC’s Grandstand, from 1981 he joined ITV Sport’s horse racing coverage; he had previously appeared in a debate about fox hunting on the ITV children’s programme Saturday Banana in 1978. During 1984 and 1985, horse racing moved from ITV to Channel 4 as Channel 4 Racing, where his role was expanded and he reported from the betting ring.

In October 2012 it was announced by Channel 4 that McCririck would not be included in the team presenting racing from January 2013. In 2018 John joined the editorial team at The Racing Paper as a weekly columnist.

McCririck is survived his wife of 48 years, Jenny.