Five News has the Wright Stuff 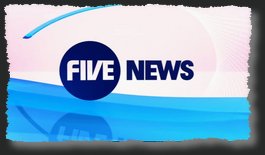 The daytime and weekend updates will go. Five News at 7 will move to 6:30pm and extend to an hour.

Set to launch this Summer, It’ll have a mixture of news, talk and entertainment. Dawn Airey dubbed the programme “Five & Friends” comparing it to Fox News’ breakfast show, Fox & Friends.

The TV Newsroom can now reveal who will present the programme – Matthew Wright from Five’s morning programme, The Wright Stuff. We understand the programme will be double headed, but no word at the moment who Matthew’s partner will be.

Kate Gerbeau and Lara Lewington have left Five News. Reporters, Alex Thomas and Victoria Gatenby have also left. Victoria was originally with Sky News, not sure if she’ll be making a return to Sky.

The lunchtime Bulletin will end in a couple of weeks time.

Polly Whitehouse and Phil Lavelle are the new weeknight and weekend presenters.

Matt Barbet has returned to reporting but will cover Natasha Kaplinsky when needed.