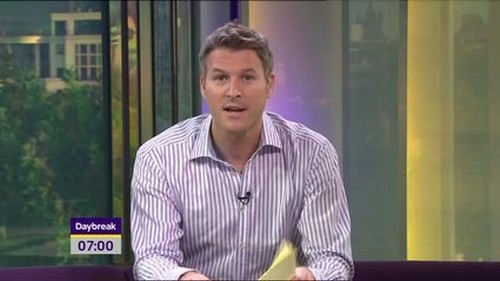 Dan Lobb will present his final Daybreak this morning as the ITV breakfast show comes to an end in its current form.

On Monday, a new look Daybreak will launch with new presenters, format, studio, music, and graphics.

Dan joined GMTV as a sports correspondent in January 2010 and transferred to the replacement programme Daybreak on 6 September 2010 as sports editor.

On 6 December 2011 he took over from Adrian Chiles on an interim basis as Chiles and his co-host Christine Bleakley were axed from the show after months of poor ratings.

Dan and Kate Garraway, the show’s entertainment editor, took over the main presenting duties and will host their final programme together today.

Aled Jones and Lorraine Kelly will present the new show from 7-9am, following Matt Barbet and Ranvir Singh, who will host the first hour of the programme between 6-7am.

Kate will remain as a presenter on Fridays.