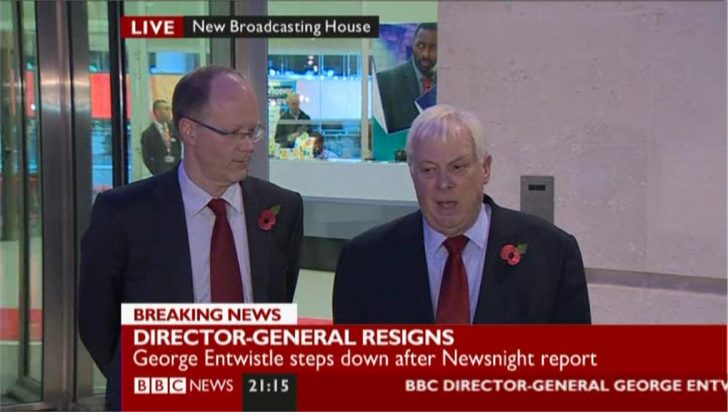 In a statement, Entwistle said: “In the light of the fact that the Director-General is also the Editor-in-Chief and ultimately responsible for all content; and in the light of the unacceptable journalistic standards of the Newsnight film broadcast on Friday 2nd November; I have decided that the honourable thing to do is to step down from the post of Director-General.

“When appointed to the role, with 23 years’ experience as a producer and leader at the BBC, I was confident the Trustees had chosen the best candidate for the post, and the right person to tackle the challenges and opportunities ahead. However, the wholly exceptional events of the past few weeks have led me to conclude that the BBC should appoint a new leader.

“To have been the Director-General of the BBC even for a short period, and in the most challenging of circumstances, has been a great honour.

“While there is understandable public concern over a number of issues well covered in the media – which I’m confident will be addressed by the Review process – we must not lose sight of the fact that the BBC is full of people of the greatest talent and the highest integrity. That’s what will continue to make it the finest broadcaster in the world.”