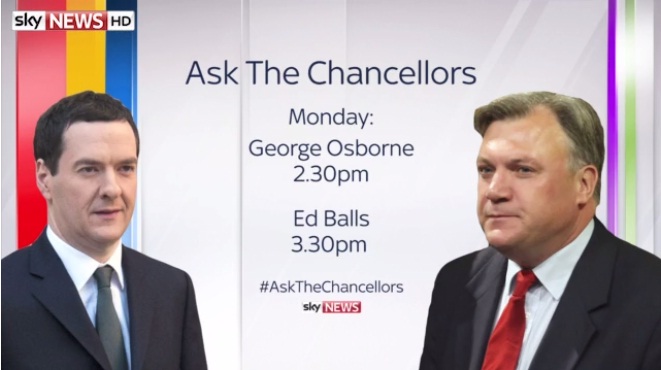 On Monday (23rd March), Sky News and Facebook will host an ‘Ask The Chancellors’ event, giving an audience of entrepreneurs, start-up companies, and local businesses the opportunity to ask tough questions of George Osborne, Chancellor and Ed Balls, Shadow Chancellor on the economic plans they want to implement after the General Election.

The pair will face 30 minutes of live questioning from the audience in separate sessions, followed by questions asked by Facebook users across the UK.

The event will be hosted at a central London location by Sky News Political Editor, Faisal Islam who will moderate the sessions. Immediately after the interviews have aired on TV, questions to the two politicians will continue via a dedicated Facebook Q&A for a further 15 minutes.

‘Ask The Chancellors’ will be broadcast live on Sky News and all of its platforms as well as live streamed to millions on the Sky News Facebook page and YouTube channel.

Director of Newsgathering, Jonathan Levy, said: “This is a chance for business people to grill the Chancellor and Shadow Chancellor on their economic policies in the run up to the General Election, as well as react to the content of Wednesday’s Budget. I expect the live Q&As to be probing and impassioned as the people whose lives and businesses are directly affected by the policies decided by Mr Osborne and proposed by Mr Balls ask the questions.”

The event follows last month’s #AskTheLeaders Q&A, hosted by Facebook and Sky News, in which the leaders of the Conservative, Labour and Liberal Democrat and Green parties were grilled by young potential voters and an audience of millions on Facebook.

Elizabeth Linder, Facebook’s Politics & Government Specialist for the Europe, Middle East & Africa region added: “We anticipate that 2015 will come to be seen as the conversational election – and millions of people are already talking on Facebook about the issues that matter to them, with topics related to the economy driving discussion. This event offers people on Facebook the opportunity to quiz the very individuals who are likely to set the future direction of our economy following May 7th.”

George Osborne is scheduled for 2.30pm, while Ed Balls follows a hour later at 3.30pm.