Sky News ‘Why are they rioting?’ Special 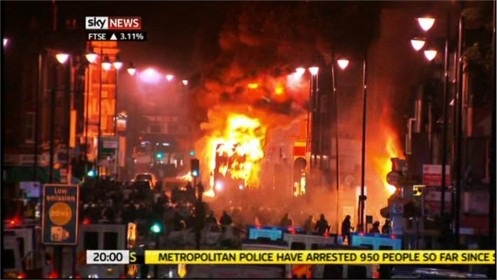 Sky News will host an hour long debate tonight (11th August) on the recent rioting that has swept the country.

The debate, hosted by Colin Brazier, will be divided into three sections: Why are they rioting? Who do we blame? What can we do about it?

Sky News’ Middle East and former Africa correspondent, Emma Hurd has returned to the UK to deliver a special report on the rioting.

John Ryley, Head of Sky News, said: “We have seen an extraordinary outburst of violence in London and other cities across England. This debate will look at getting to the bottom of what’s caused the unrest and no doubt bring up the questions many people want answered.”

Viewers will be able to join in the debate by voting online via a Sky News poll: Why are they rioting? Protest or Greed. The vote will feature on screen throughout the debate.

The programme is live from Westminster at 8pm.